Superman: Escape From Krypton (formerly known as Superman: The Escape) is an Intamin AG launched shuttle roller coaster located at Six Flags Magic Mountain in Valencia, California.[1] It is one of only two reverse freefall coasters built by Intamin. It uses Linear Synchronous Motors (LSM) to propel the cars to the 104 mph (167 km/h) top speed. Viewed from the side, Superman's shape resembles a giant "L" shape. 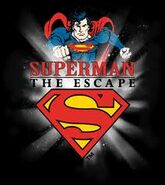 A sign points out what will happen to Superman and that it will return soon.

A side view of the tower.
Images-2.jpeg
Add a photo to this gallery

Retrieved from "https://rollercoaster.fandom.com/wiki/Superman:_Escape_From_Krypton?oldid=52767"
Community content is available under CC-BY-SA unless otherwise noted.