Smiler (stylistically known as "The Smiler") is a Gerstlauer infinity coaster located at Alton Towers in Staffordshire, England. The ride is positioned where the Black Hole tent used to be situated, opposite Oblivion. With 14 inversions, the coaster was for just over two years the leader in that record category. However, the many problems this ride has suffered are said to have caused Guinness Superlatives to consider retiring this record category, in line with its policy of not promoting records which could be seen as undesirable.

Development for SW7 (Secret Weapon 7) started in 2011 shortly after the opening of TH13TEEN (SW6) in 2010. The Black Hole tent in the X-Sector of the park had remained empty since the ride itself was removed and the development team decided to choose it as a development site. Plans for the ride were submitted and granted in 2012 whilst land clearing and advertising of SW7 began, it was discovered that the plans were for a new Gerstlauer coaster called an 'Infinity coaster' that would feature many inversions, months later near the end of 2012 it was confirmed on the radio by John Wardley (track layout designer) that it would feature 14 inversions, more than any in the world. It was also hinted the ride would be called 'The Smiler' and many advertisments of what would become the logo were placed all over the UK including underground stations and even projected onto the Elizabeth Tower. An official website about the Smiler was launched with information and even a game.

At the start of 2013, construction had almost finished and The Smiler was set to open in March. Even though construction completed, The Smiler could not open in March due to "Unforseen teething problems" said an Alton Towers representative. On May 31, the ride eventually opened.

The Smiler proved to be a popular ride that had a wide range of merchandise, advertisments were also large and even had an agreement with Goodfellas pizza to do a limited addition 'Smiler pizza'.

The ride has been known for various structural and technical problems. Trains have been known to stall, small plastic guide-wheels have fallen of the vertical hill lift and once a bolt had come off a section of track causing two pieces of track to disengage which lead to a small gap in the track.

The most serious incident occurred on June 2 2015 when an empty test-train had stalled on the 'Batwing' element, shortly after a train with passengers was dispatched and crashed headlong into the stalled train, the riders were trapped for several hours whilst rescue teams attempted to reach them, 5 were seriously injured including 2 young women having to have partial-leg amputations. After months of thorough investigation, it was not the ride itself that was at fault, but the carelessness of two park employees.[1]

The Health and Safety executive conducted a criminal investigation into the actions of a ride engineer and ride operator which led to the incident. It concluded that the ride was restarted without the proper safety protocol being followed; specifically, a ride operator sent an empty train out for testing however it had stalled on the batwing element and the operator believed it had made its full circuit when it hadn't. The operator then dispatched a train loaded with people but it had stopped on the lift hill as safety sensors had detected the stalled train which in turn stopped the chain lift to prevent the trains being on the same block of track (meaning the safety lock was working), however a ride engineer had overridden the system allowing the operator to reset it which effectively disabled the safety lock, allowing the train to enter the same block of track as the stalled one. Staff on the ride were apparently completely unaware of the stalled train.

The Smiler reopened on March 19th 2016, 9 months after the accident after additional safety procedures were added, including an additional level of authorisation that ensures the ride can not be overridden without a senior member of staff authorising it and being in attendance. The technical improvements include multiple additional CCTV cameras and additional manual reset buttons around the track which require staff to inspect each individual section to verify it is clear before authorisation can be given to restart the ride. 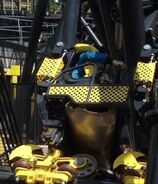 Immediately after the crash, you can see the underside had caved in

Just before removing the damaged car

The front of the damaged car

A closeup of the front of the damaged car

The damaged car from the left side, you can see they removed the end left seat 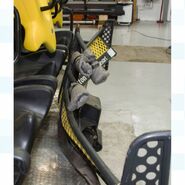 The ride train is dispatched from the station and goes into a left-handed banked turn where it encounters a Heartline roll (first inversion), the train ascends up the first hill-lift and banks to the right into a downward corkscrew, then the train traverses two consecutive dive loops before entering the Batwing element, after this the train goes into a corkscrew and onto a brake-run and ascends the Vertical-hill lift where it banks to the left and enters another downward corkscrew before going into a sea-serpent roll, after this the train goes over an airtime hill where 'Ejector airtime' is felt by passengers, the train then enters the Cobra roll which leads to the two final inversions (two corkscrews) and then finishing on the final brake-run.

Smiler features two lift hills and 14 inversions. The ride's batwing element resembles the Smiler logo when seen from off-ride. The ride also features an indoor section with a rare inversion before the lift hill, designed to surprise first time riders. The ride's elements are mirrored after its two lift hills and the cars can "duel" each other in a synchronized display. The theming extends to the layout of the queue beneath the ride which twists and turns in unexpected directions. The ride's iconic soundtrack was provided by IMAscore. The most noticeable feature of The Smiler is the Marmaliser in the center of the rides area. It has five legs, each with it's own ability. The Inoculator gives you a jab of happiness as you pass Stage 1 of Marmilisation. The Tickler aims to tickle you until you can't resist smiling. The Flasher produces flashing lights, blinding you as you travel under the leg. The Giggler releases infectious, intoxicating laughing gas and The Hypnotiser has the power to disorientate, mesmerize and disrupt your self-awareness.

Please note that due to health and safety, laughing gas is not used and instead it is just water vapor. Also, since the Smiler was opened the use of laughing gas for recreational purposes has become illegal.

The ride was codenamed SW7. This stands for stands for Secret Weapon 7. This codename was used for Thirteen (SW6),Air (or now called ’Galactica’)(SW5) and others at the park. The ride was originally going to be called 'The Marmialiser' but this name was instead given to the structure above the ride.

This article lacks images. You can help Coasterpedia by adding some!

Retrieved from "https://rollercoaster.fandom.com/wiki/Smiler?oldid=53392"
Community content is available under CC-BY-SA unless otherwise noted.