Shock Wave is a Schwarzkopf sit-down roller coaster located at Six Flags Over Texas in Arlington, Texas.[1] Contrary to popular belief, it was not the first roller coaster to feature back to back vertical loops. That distinction goes to Double Loop at Geauga Lake & Wildwater Kingdom, which opened in 1977, a year before Shock Wave. Shock Wave is located at the very edge of the park, easily seen from the Interstate Highway 30.

Trains 7 cars per train. Riders are arranged 2 across in 2 rows for a total of 28 riders per train.

When Shock Wave opened on 22 April 1978, it was the tallest roller coaster in the world, at 116 feet tall. It was overtaken only weeks later by the Loch Ness Monster at Busch Gardens: The Old Country

While not the fastest, scariest, or most technically advanced ride today, it still is ideal toward younger riders looking to go on their first "upside down" roller coaster as well as nostalgics and coaster enthusiasts

The ride is built on Johnson Creek real estate and had to temporarily shut down in the 2004 season because of a flood. Shock Wave temporarily closed again in early 2008 for an extensive remodeling.

After the 116 feet (35 meters) lift hill, a U-Turn with a slight dip follows. The coaster then goes down the first drop into the back-to-back loops, with peak forces at 5.9G. The train then travels up a hill into the mid-course brake run. The ride then turns right and dives down and back up. The ride then turns left and drops down again. The final element is a hill with a left turn that goes into a 270 deg helix to the right, before returning to the station.

Since it's opening, Shock Wave has had many color schemes. On opening, the track and supports were all-white. since then, the coaster has been painted dark-blue, light blue, silver, white track with yellow supports and dark-blue with red supports.

Currently, the ride is painted green with blue supports. 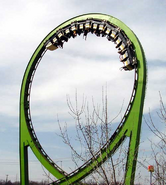 One of the two loops.
Add a photo to this gallery

Retrieved from "https://rollercoaster.fandom.com/wiki/Shock_Wave_(Six_Flags_Over_Texas)?oldid=54936"
Community content is available under CC-BY-SA unless otherwise noted.