The ride starts with a left turn out of the station and on to the 122 ft lift hill. At the base of the lift hill, the train reaches its maximum speed of 57 mph . Following the lift hill are two camelback hills, the first being 100 ft tall, and the second being 95 ft tall. In these hills, riders experience "ejector air-time." The train then jumps a bunny hop and another camelback hill and a double-up hill, before turning around for the second half of its course. After the turnaround, the train hits another bunny hop and another double-up hill. After the double-up hill is a unique element known as a "trick track," in which the track banks from side to side, on an otherwise flat section. After the trick track, there is a series of 5 bunny hop hills. After the last hill there is an on-ride photo camera and the ride's finale, a 630 degree helix, in which riders experience lateral g-force. After the helix, the train slides on to the final brake run and does a u-turn back into the station.

2 trains with 6 cars. Riders are arranged 2 across in 2 rows for a total of 24 riders per train. The trains were manufactured by Philadelphia Toboggan Coasters, Inc..

Since Shivering Timbers opened, it has been among the best wooden roller coasters in the world.

The station and lift hill. 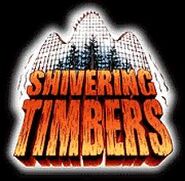 The logo for Shivering Timbers.

Top of the lift hill

Helix at the End of the ride.
Add a photo to this gallery

Retrieved from "https://rollercoaster.fandom.com/wiki/Shivering_Timbers?oldid=49265"
Community content is available under CC-BY-SA unless otherwise noted.