Riddler's Revenge is well known for its interaction with the queue line, causing the ride to be photogenic from numerous areas. It is currently the only stand-up coaster to contain a lift hill that crosses through a vertical loop. In 2004, it's been voted the best roller coaster at the west coast. 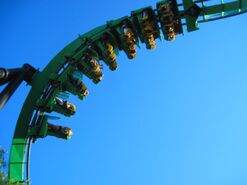 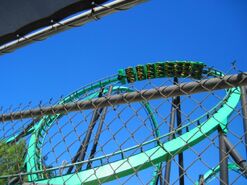 A train on the Inclined Loop. 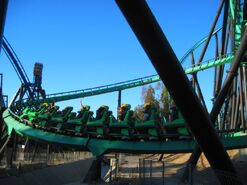 A train on a curve with Batman The Ride in the background.
Add a photo to this gallery

Retrieved from "https://rollercoaster.fandom.com/wiki/Riddler%27s_Revenge?oldid=48605"
Community content is available under CC-BY-SA unless otherwise noted.