Revolution is a Schwarzkopf sit-down roller coaster located at Six Flags Magic Mountain in Valencia, California.[1] The ride is the first modern roller coaster to feature a vertical loop.

The ride was designed by Anton Schwarzkopf and built by Intamin AG. The vertical loop uses a triangular lattice of steel tubes.[2] The only other roller coasters that use this support type are SooperDooperLooper at Hersheypark, Golden Loop at Gold Reef City, Cliff Hanger at Ghost Town in the Sky, and Katapul at Hopi Hari. 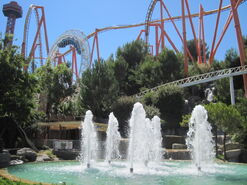 Retrieved from "https://rollercoaster.fandom.com/wiki/Revolution_(Six_Flags_Magic_Mountain)?oldid=53826"
Community content is available under CC-BY-SA unless otherwise noted.