Michigan's Adventure originally opened in 1956 as "Deer Park". It included a petting zoo, and in 1958, a miniature railroad. The park was bought by Cedar Fair in 2001, and has been operated by them ever since.

This family friendly amusement park located in Muskegon, Michigan has been a favorite of families throughout Michigan for several years. Originally opened as a petting zoo known as Deer Park in 1956, Michigan’s Adventure has come a long way in delivering family thrills. Ever since the park opened it has been growing in size and looks to keep expanding over the years. Although Michigan’s Adventure may not have the biggest and fastest coasters around, rides like Shivering Timbers and Thunderhawk are thrilling rides for the whole family.

After operating as a petting zoo for twelve years, Deer Park was purchased by Roger Jourden in 1968. Jourden began by selling the deer and other animals that called Deer Park home and then moved on to making it an amusement park by bringing in traditional carnival-style midway rides. In 1972 the park was renamed Deer Park Funland to promote the thrill ride aspect of the park. The park remained a small collection of carnival rides until a breakthrough came in 1979. This breakthrough was Corkscrew, the park’s first roller coaster.

The addition of Corkscrew proved to be a preview of what was to come. Although there was a period of nine years of downtime, Jourden made some huge upgrades in the season of 1988.

Jourden got right back down to business in 1994 with the addition of the park’s second wooden roller coaster, and third coaster overall, Zach’s Zoomer. Zach’s Zoomer is a small wooden coaster designed for children, and appropriately so is named after Jourden’s grandson. Although it is not exactly the most thrilling of rides, it holds the title of being an ACE Coaster Classic.

Michigan’s Adventure’s next addition was the one that thrust the park from a small local park into the national stage. In 1998 Michigan’s Adventure debuted Shivering Timbers. Shivering Timbers. is an airtime filled out and back wooden coaster designed by Custom Coasters International. Standing at 122 feet tall, over a mile in length, and featuring trick track and a powerful helix Shivering Timbers was widely renowned as one of the best wooden roller coasters in the world at the time it opened and to this day is still highly regarded. Shivering Timbers also was a huge success for the park as a whole, as the popularity and hype it caused allowed the park to gain funds for future ride additions.

Michigan’s Adventure made the most of what it gained from Shivering Timbers by opening two new steel coasters in 1999. Both Mad Mouse and Big Dipper opened in 1999. Mad Mouse is exactly what it sounds like, a wild mouse style coaster. One thing that makes Mad Mouse unique is that it is one of few Arrow Dynamics designed wild mouse coasters around. Big Dipper is just your generic kiddie coaster, but its addition made the coaster collection more family friendly which is an aim that Michigan’s Adventure always aims for.

Additions to the park stalled somewhat after being acquired by Cedar Fair, but in 2005 it was announced that the WildWater Adventure would be adding Funnel of Fear, a large waterslide which remains as arguably the most popular attraction in the water park. Michigan’s Adventure gained another aquatic ride in 2006 with the addition of Grand Rapids. Named after a city in Michigan, Grand Rapids is a rapids ride designed by Intamin AG. Although it is a water ride, Grand Rapids is located in the coaster/thrill ride section of Michigan’s Adventure.

With the closing of Geauga Lake in Ohio, Michigan’s Adventure was given the gift of Thunderhawk by Cedar Fair. Thunderhawk is widely regarded as one of the more well taken care of Vekoma Suspended Looping Coaster models out there. It was a great addition to the park and made the park’s lineup more well rounded. Standing at around 110 feet tall and featuring five inversions, all while your feet dangle beneath you, Thunderhawk marked the biggest thrill ride addition since Shivering Timbers.

The 2010 season brought another transplanted attraction to the park. The former Valleyfair! attraction Bumper Boats made the move from Minnesota to Michigan as they landed in their new home at Michigan's Adventure. This was followed up by another new attraction for 2011 as the "splashtastic" Beach Party water complex was added to WildWater Adventure.

Unfortunately the next change wasn't an addition, but rather a ride removal. The flat ride Falling Star was removed for the 2012 season. The removal did not come as much of a surprise since its demise had been rumored for a few years.

The map as it appears in 2011; click on it for full-size view 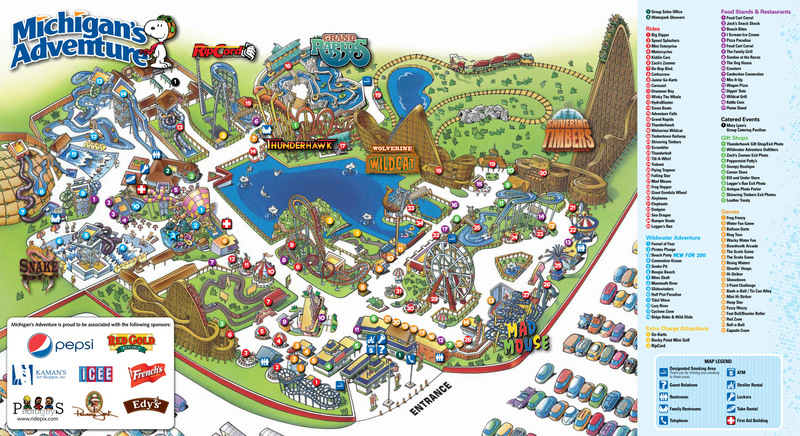 Retrieved from "https://rollercoaster.fandom.com/wiki/Michigan%27s_Adventure?oldid=49966"
Community content is available under CC-BY-SA unless otherwise noted.