Mean Streak was a Dinn Corporation wooden roller coaster located at Cedar Point in Sandusky, Ohio.[1] Constructed out of 1.7 million board feet (4,000 m³) of treated Southern Yellow Pine,[2] it was the tallest and fastest wooden coaster when it opened in 1991. Mean Streak was one of two wooden roller coasters at the park; the other being the Blue Streak. The track was re-tracked almost every year and had its own carpentry staff.[3]

An announcement by Cedar Point on August 1, 2016, stated that Mean Streak would be closing permanently on September 16, 2016. The ride is (as of August 2017) being converted by Rocky Mountain Construction into Steel Vengeance, a hybrid hypercoaster set to open for the 2018 season.

After climbing the 161-foot-tall lift hill, Mean Streak dropped riders at a 52-degree-angle and over two large elevated curves. An on-ride-photo system took rider's pictures at the mid-ride block brake run. Mean Streak criss-crossed its wooden structure nine times at speeds up to 65 mph (105 km/h). Trim Brakes had been added to the ride's first drop, and it was considered a rough ride.

3 trains with 7 cars per train. Riders are arranged 2 across in 2 rows for a total of 28 riders per train. The seats are divided, with headrests, Individual ratcheting lap bars and seatbelts. 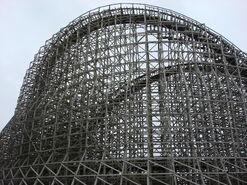 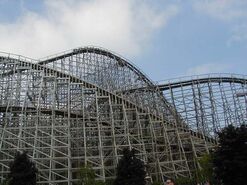 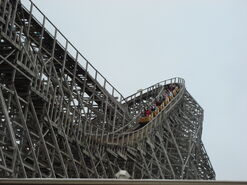 Add a photo to this gallery

Retrieved from "https://rollercoaster.fandom.com/wiki/Mean_Streak?oldid=51198"
Community content is available under CC-BY-SA unless otherwise noted.