Goliath is a Bolliger & Mabillard inverted roller coaster located at Six Flags Fiesta Texas in San Antonio, Texas.[1] Unlike most rides named Goliath, it is not a hyper coaster.

Goliath originally opened in 1995 at Thrill Valley in Japan. It was moved to Six Flags New Orleans in 2003, where it operated until Hurricane Katrina hit the park in 2005. It was moved to its current location in San Antonio in 2007. 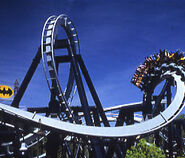 Goliath as Batman: The Ride at Six Flags New Orleans.
Add a photo to this gallery

Retrieved from "https://rollercoaster.fandom.com/wiki/Goliath_(Six_Flags_Fiesta_Texas)?oldid=49530"
Community content is available under CC-BY-SA unless otherwise noted.