Alton Towers Resort is a theme park located in Staffordshire, England. They installed their first roller coaster in 1980 and have been building new coasters ever since. Alton Towers has lots of history behind it. Alton Towers has two hotels and a water park as well as its theme park with world-beating coasters!

Although Alton Towers became England's first theme park in 1980 (although amusement parks generally are far older) and has since grown into a renowned destination for thrill-seekers and park lovers around the world, its unique history got off to a start as far back as the seventeenth century. It was then that Charles Talbot, First Earl of Shrewsbury, settled into the countryside of Alton, Staffordshire and created his residence on a 500-acre plot of land. The estate was fully landscaped and a Gothic mansion was built. From here Alton Towers has continued to thrive.
Two generations later, Earl Shrewsbury's grandson passed on without an heir to receive the estate, in 1857, and so began nearly a century of proceedings to find a new owner. That came to an end at long last in the 1940s when Alton Towers Limited was formed and purchased the former residence. Alton Towers eventually landed in the hands of a man by the name of John Broome in 1980. Broome wanted to introduce the theme park to England, and at the same time, retain the lush beauty of the landscape.

And so the theme park concept hit Britain. All park-goers would pay a single admission fee to enjoy the rides, attractions, and scenery. Alton's first coaster, Corkscrew, opened with the park in 1980 from Arrow Dynamics, flipping riders upside-down twice during the 2,400-foot-long ride. Three years later, a second coaster was added and Black Hole began taking adventurers on a twisting course enclosed in darkness.
Throughout the '80s, Alton Towers expanded its ride collection yearly and also added more themed sections to the park, introducing the Zierer-designed 4-Man Bob for the 1985 season and the steel Dragon Coaster (later renamed Beastie) the following year. Two years later in 1988, the park brought two more steel coasters to Alton with the addition of the fourth and fifth coaster tracks: Schwarzkopf's Beast, a twister with 2,862 track feet and a wild mouse from Vekoma named the Alton Mouse. The major growth wouldn't end there. In 1990, Alton brought the third-hand Schwarzkopf shuttle-looper named Thunderlooper.

A shift in the park's ownership occurred in 1991 when the Tussaud's Group acquired Alton Towers with a new master plan for the growing park's future, as well as a few surprises up their sleeves. Tussaud's began that season with the removal of three of the smaller coasters - the 4-Man Bob, Alton Mouse, and Beast.
The Tussaud's Group wanted to update the coaster collection with a revolutionary lineup of new coasters to put Alton on the worldwide map which would be dubbed 'Secret Weapon' rides. For the first Secret Weapon project, Arrow Dynamics was contacted to build a prototype ride coaster known as a 'pipeline', but after two failed attempts, the pipeline ride was scrapped. Two new steel coasters, however, did find their way into the collection in 1992: the New Beast and Runaway Mine Train.

In 1994, the first Secret Weapon would finally become reality. Project 'Secret Weapon 3' took shape in the form of Nemesis and opened as a very unique inverted coaster from Bolliger and Mabillard. Designed by John Wardley, the coaster was threaded through tunnels and trenches, the majority of the layout being situated below ground level in part due to height restrictions. Nemesis drew rave reviews from coaster lovers around the world for its one-of-a-kind course, four inversions, and heavy theming.
Four years later, the next Secret Weapon was unveiled with Oblivion, the first of a new breed of coaster from Bolliger and Mabillard featuring a centerpeice near-vertical 18-story drop plummeting into the earth. And, keeping with the four-year pattern, March 16, 2002, marked the debut of Alton Towers' fifth Secret Weapon when AIR: Aerial Inversion Ride took off as a laydown themed terrain coaster and the park's third B&M-manufactured ride.
Alton Towers, as Britain's largest and oldest theme park, should be a definite destination for today's thrillseeker!

An area in the east of the theme park designed to be a frightening, post apocalyptic world. The area's main roller coaster, Nemesis, is themed around an alien creature, trapped underneath steel poles, when it was disturbed by Alton Towers. Towards Galactica, there are more calm colours and scenery, designed to be a futuristic oasis from the tyranny of the Nemesis creature. The rides in the Forbidden Valley are:

The Blade, a pirate-ship ride

Nemesis Sub-Terra, a walk through ride with a free-fall drop.

An area towards the south of the theme park, themed to be an 'alive' forest that is engulfing the land. There are only 2 rides in this area:

An area themed to be a magical giant land, with giant mushrooms and flowers. The rides here are aimed at children:

Charlie and the Chocolate Factory: The Ride, an indoor boat ride with a motion simulator

The Towers themselves and the surrounding area. Its one ride is Hex, a Vekoma madhouse ride. Also including the towers walkthrough and sanctuary.

An area themed around pirates. All of its rides, except for Wicker Man, are family rides:

An area themed around an African Village. It has only 2 rides:

An area simlilar to the Dark Forest. There is only one ride here:

An area themed around a sinister government organization, controlled by the Ministry of Joy. 2 of the rides here hold a world record:

A generic area with only one ride:

An area themed around the UK kids' TV channel, Cbeebies. All the rides here are kids' rides:

Alton Towers submitted planning applications for a brand new rollercoaster in late 2011, being granted planning permission in early 2012. With the decosntruction of the Black Hole tent, work begun on the new ride, code named SW7, following a long tradition of ride code names (starting with Nemesis SW3). The Smiler is a Gerstlauer Infinity coaster and features 14 inversions, making it the current record holder for the most inversions. It is positioned in the X-Sector area of the park opposite Oblivion.

The ride opened on 31 May 2013 after various set backs, including technical issues and harsh winter conditions delaying the construction. The ride missed two planned opening dates, March 16 and 23 of May.

Ever since the ride opened, it has been plagued with a vast number of issues. Multiple ongoing technical issues, several stalls as well as components such as bolts coming loose from the ride's structure and falling to the ground below were all covered by various media platforms throughout the year.

On the 2nd June 2015, all 16 riders on a car were injured (five badly) when it crashed into the back of an empty car at 50mph. The accident happened at 14:09 BST (UTC+1). One of the park's directors described the accident as "the most serious incident in the park's history."[1] The park was closed from Wednesday 3 June to Sunday 7 June inclusive as investigations continued; the park reopened from Monday 8 June but X-Sector, where the Smiler is located, remained closed until the 14th.[2] The Smiler remained closed for the rest of the season; following a Health and Safety Executive investigation, which concluded that the incident was due to operator error and not to any failure of the ride itself, the Smiler reopened for the 2016 season, when Alton Towers put in place a new safety procedure such that no ride can be restarted without a senior member of staff being present.[3]

The logo in the winter. 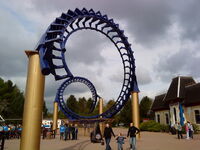 The Corkscrew, honoured at the entrance to the park. 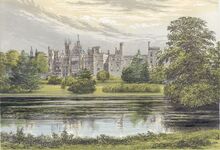 The towers in 1880.
Add a photo to this gallery

Retrieved from "https://rollercoaster.fandom.com/wiki/Alton_Towers_Resort?oldid=54830"
Community content is available under CC-BY-SA unless otherwise noted.